I’ve been a little bit busy…

So, last time we spoke I was knee-deep in writing my cyberpunk novel, Warpath – which I finished within the (frankly) nonsense time frame I set myself, with every intention of self-publishing via Amazon for Kindle.

Well, I got kinda busy. In point of fact, I got really busy.

I didn’t intend too… honestly. I’m quite lazy by nature, but I also happen to be self-employed. Which means I simply don’t have the luxury of turning down work when it comes my way.

Where does that leave Warpath? Well, it’s currently in its third draft. And I’ve gone down all the usual paths a writer travels, from hating it to thinking it’s alright, to hating it again and then rebuilding most of it from scratch, only to realise that I preferred the original version anyway. Ah, the joys of writing fiction, eh? But it exists, finished yet unfinished, and it is a THING and maybe one day soon-ish it will be a finished finished thing on Amazon that you will be able to read. But I can’t lie, soon-ish might well end up being not that soon at all. Because of the aforementioned work and how much of my time it takes up.

I write everyday, though. Mostly as notes on my phone that I try to collate once a week. It’s not the best method, but I do what I can. Stealing minutes from myself here and there, a thief of my own time, so I can at least feel a fleeting sense of achievement when it comes to my story building, rather than beating myself up over lack of progress.

So, yes, Warpath is almost done with. Yes, I could well set it free this year. We’ll see…

In other glorious news, Mark Stay – he of the Two Marks from the Bestseller Experiment (arguably one of the best podcasts for writers out there), has had his fantasy novel, the End of Magic, published by Unbound. 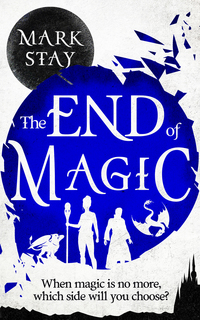 There are epic fantasies where magic is a thing of the past, spoken of in hushed tones until some kid pulls a sword from a stone and it all kicks off again. . .

This is not one of those stories.

The End of Magic will take you back to a time when magic collapsed, when the world went mad, chaos reigned, and we’ll get to see it through the eyes of three people who have everything to lose…

Sander Bree is a royal mage. The personification of privilege, he lives a cushy life advising the king on matters of court and politics, yet still finds plenty of time to complain that he’s stuck in a rut.

Rosheen Katell is an immigrant freelancer and, with Anzu her griffin, she’s worked hard to build a reputation as a trustworthy truth seer. She never lies, never kills.

Oskar is Rosheen’s younger brother. Mute from birth he is a moonchild. Alone and vulnerable, he will endure more change than anyone.

Both Sander and Rosheen are entirely dependent on magic. The source of their power is the Lapis Moon in orbit above. Very soon, that magic will be gone, changing their lives and their world forever.

Sander must keep a promise that would have been difficult enough with magic, but is a suicide mission without it. Rosheen is forced to side with a murderous warlord, and her once-solid principles are tested and found wanting. Oskar needs to survive unthinkable terror and find his sister. All are set against one another in a war unlike anything the world has seen before.

The End of Magic is an exhilarating wild ride, by turns epic and intimate, funny and dark, and perfect for fans of Jen Williams, Joe Abercrombie and Scott Lynch.

See? Now go and read it.